Day three of “Let’s Be Nice On Pete Brown’s Beer Blog Month” and boy, it’s tough. A real test of will. If I was arrogant enough to believe that people with influence ever read this blog, I could conjure up a fantasy that they were being as annoying as possible simply to try to get me to break my resolve. Naming names would be tantamount to having a go, but from the government through the industry and the media to the blogosphere, Christmas joy seems to have got delayed, stuck behind an enormous cartload of twattishness. I’m rising above it. I will maintain my resolve. I will be nice.

It was very easy to think nice thoughts on Tuesday night. Thornbridge’s latest Joint Venture is with Pivovar – a company that imports foreign beers – and it’s a joy: ladies and Gentlemen, say hello to The Sheffield Tap, Platform One, Sheffield train station.
To paraphrase the immortal John-Anthelme Brillat-Savarin, a train station without a pub is like a beautiful woman with only one eye.
Sheffield station did have a pub – kind of. In 1904 a set of refreshment rooms was opened for first class passengers. It was beautiful, with tiled walls and a long wooden bar. In 1975 the bar was closed and it was turned into a waiting room. Soon after, it was used for storage. And after that it was closed up, and this listed building was left to rot. The roof fell in, the tiled disappeared behind layers of grime and six-foot drifts of rubbish.
Why Network Rail and their predecessors were perfectly happy to let this happen, to forego the chance of a little goldmine in a beautiful building at a busy city station when they’re continually putting up fares because they don’t have any money, is speculation that will have to wait until after the end of Let’s Be Nice On Pete Brown’s Beer Blog Month. Network Rail were also apparently indifferent to Pivovar’s plans to renovate the place. They have ‘endorsed’ the move, but given little if any practical help.
No matter: Pivovar’s Jamie Hawksworth got in touch with Thornbridge, and between them they’ve created one of the most pleasing bars you’ve ever seen. It combines the grandeur and pride of a classic Victorian architecture, the quiet beer worship of a Belgian cafe and the snug intimacy of a British boozer. Eight Thornbridge Beers on tap, hundreds of bottles from around the world in the fridge, quality Czech lagers, the works.
On the downside there’s one hand drier in the gents that’s like a child’s toy hand drier, and if they don’t put a departures board in there soon I promise you you’ll miss your train. Apart from that, it’s a perfect pub.
(With one slight caveat: apparently, when they got into the place and made their way through the mounds of refuse, on one of the walls was the legend: “Barnsley Skins”. The bar has of course been restored to its original glory but to me this is a vital piece of period detail that has been removed, and I was upset that the guys seemed unwilling for me to scrawl it back on the wall where the big mirror is.) 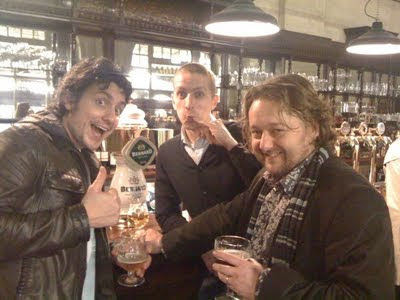 Thornbridge’s Kelly Ryan, Beerticker movie cameraman Dave, and me – just before it got messy.
It’s only two hours from London to Sheffield, as Simon Webster from Thornbridge kept reminding me. From our house, it’s sometimes touch and go whether I can get to the White Horse in Parson’s Green in that time. The Tap may just be a regular haunt – it’s well worth the travel time.
One bit of advice to anyone thinking of drinking there: if you haven’t done so already, when you discover Raven, the new black IPA from Thornbridge, on no account treat it as a session beer. Your tastebuds will tell you it is. Your beer drinking instincts will tell you it is. If you succumb to these voices you will wish yourself dead the following morning.
Trust me on this.

"Barnsley Skins"? Surely you would have had to disport yourself in the altogether to reinstate this legend? Or am I missing something?

Wot, no pictures? I'll be going shortly, but still…

I was going to take picture, honest I was. But then the drinking started…

From Glasgow it takes as long to get to Sheffield as to get to London. Where do the two hours go??

Quality Czech lagers? I knew I was moving to the wrong English speaking country!

Sounds like a wonderful place. I'm liking Be Nice Month (it can't be easy!) You look so happy in the picture!

Ah Pete….the better news is that the Gardiners Rest is open again. This wonderful pub owned by Tim and Eddy (I once spent an idyllic evening drinking their beer in their brewery so now of course we are on first name terms) of The Sheffield Brewing Company, was badly flooded a couple of years ago and has taken this long to dry out and re open. Its in the Kelham Island area and so is one of a number of excellent pubs to visit without having to listen to endless "The train on platform 5….." announcements. Plus its only 5 min walk from a bus stop for the last bus to Barnsley which is later than the last train and drops me off at the end of my road..wink!

me and another guy had both just washed our hands, we turned round, looked around the room, looked at each other, (hands sticking out all floppy and wet)'eeerrrr what now' the dam thing looked like a soap dispencer.
other than the pathetic hand dryer it the best bar I've seen and hope to be drinking in there alot! maybe with a new Sheffielder. Pete?

Thanks pete – didnt know about this one!!

I agree Pete, having visited the pub recently… fantastic place!

So fantastic, in fact, that I decided to compose this silly little poem about the experience. Some of it is true, I'll leave you to guess what parts!

The Pub On Sheffield Station (by Carl Purkins)

Then the train it came, we were on our way
And before long I felt a curious sensation
For all that beer there was a price to pay
Thanks to the pub on Sheffield Station

Then the guard announced the train was late
And it felt like sheer castration
I crossed my legs as I was forced to wait
Curse the pub on Sheffield Station!

London at last! I dashed to the gent
A feeling of such elation!
I let rip, a feeling heaven sent
Relief from the pub on Sheffield Station!

Then I woke up and felt the damp bed
And my wife she sought an explanation
“Don’t blame me!” I simply said
‘Twas the pub on Sheffield Station! 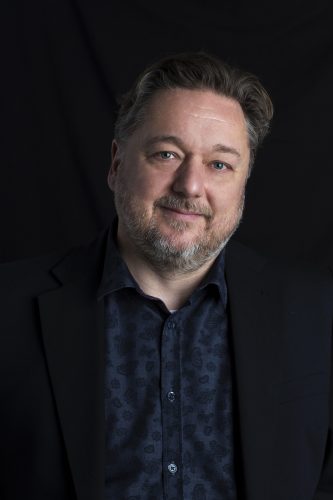