Have spent most of the day in a radio studio doing syndicated interviews about the Cask Report, which we’re launching today.  This means the Report, which I was hoping to put up here as an exclusive here earlier today, has already been picked up by several bloggers which, along with some favourable national media coverage, is great stuff. 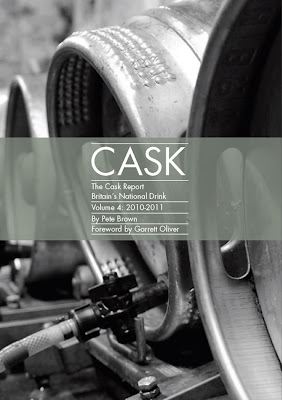 Regular readers of this blog will know I’m hardly a cask ale purist.  I regularly criticize people who are.  But cask ale is the most misunderstood of beers.  And it was cask ale brewers who got together and decided we needed an industry report on their part of the beer market.  I’m proud to write the report each year, and to be a spokesperson for cask ale when the report comes out.
This year’s report contains great news for cask ale brewers and pubs that sell it.  In fact, it’s the best news we’ve had in the four years I’ve been doing the report:
This in an amazing performance given the general state of pubs and the collapse of volume in the beer market as a whole.
But despite the fact that many people simplify this good news into “cask is growing”, actually it’s not.  Cask’s fantastic performance is great news for drinkers, but good as it is, it’s still only static in volume terms.  That’s because most cask ale drinkers only drink it infrequently, and average throughput of cask ale (in line with beer generally) is down 5 per cent.
I have a tiny worry that in spreading the good news about cask, we might make drinkers, brewers and pubs complacent, that all you need to do is stick a few handpulls on the bar and everything will be sorted.
It doesn’t work like that.
In the beer world, we spend time with other like-minded people.  The brewers and publicans I speak to are all doing really well, but that’s because they work hard developing beers, keeping them in great condition, and telling people how good they are.  It doesn’t happen automatically.  46% of the UK population have still never tried cask ale.  Only 18% of drinkers claim to drink it on a regular basis.  People still don’t know that much about it.
It’s important that anyone who loves cask ale who reads the report (downloadable here in full) reads the warnings as well as the fantastic news on cask’s resurgence.

Mind you, if the Southwold Bitter was off, I'd have the Schlenkerla, Mort Subite Kriek or probably whatever the BrewDog keg is on before most of the rest. London Pride before Brugse Zot, though.

Value growth and volume steady. Does that mean punters are basically being stunk more money for the same amount of grog?

Cask beer must be growing in popularity as the site was too busy for me to download the report when I was at work.

This is very encouraging news but Pete is right now is not the time for complacency. The ball is rolling for cask ale and we need to keep the momentum. As bloggers we must carry on doing our bit to entice the 46% to try cask ale and hopefully keep them coming back for more.

Pete — this is a fascinating report and as someone who loves good quality and distinctive cask ale I'm glad I've read it!

One thing that really struck me is the stuff about price, which is probably the most challenging thing in the report for the traditional CAMRA approach to cask, but you're absolutely right, a premium product should attract a premium price.

I'm sure the image barrier is more of an issue than it appears in the research reported here, but it's heartening to see that the cask market is getting younger, something that's badly needed. As I highlighted in my own recent blog post about the Great American Beer Festival, one thing that's really striking in the US for a British observer is how much younger — and trendier — the craft beer community is over there.

The limitations you work within given the people who commissioned the report have been gone into on other blog posts on the topic — cask doesn't guarantee quality, even though most of the great beer brewed in Britain is currently cask. If I could change one thing in the report in this respect it's the stereotypes in "Why cask matters" which should make clear that cask isn't a beer style in its own right, but can encompass a huge range of beer styles and gravities, including lagers and high ABV beers.

Agreed a great report and I especially like the way you highlight the complacency aspect. I think this is the reason that the bigger breweries have been in decline recently as they seem to think that people will just continue to buy Carling and Fosters. The best they seem to be able to come up with in terms of brand extensions is "super chilled" which is pretty much the norm in most countries for lager anyway. Cask ale has the upper hand in this respect as ale can differ sometimes wildly in terms of taste, whereas lager is restricted to standard or premium with minimal difference in terms of taste within these boundaries. To maintain this position the cask brewers need to stay on top of their game and continue to find new ingredients and techniques if they want to see more younger drinkers and YoY growth.

Actually if this is based on last year's sales, then I can conclude that everyone else's consumption is actually down, since my volume increased substantially.