While I was writing Three Sheets I found this great book called Planet Party.  Basically it’s an analysis of ten of the world’s greatest festivals, from Munich’s Oktoberfest to the Mexican day of the Dead. 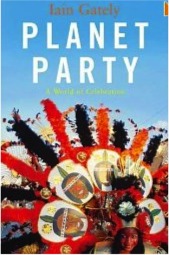 The central thesis of the book is that civilizations need rules, conformity and order to survive.  But as we live most of our lives like this, we also need occasionally to let off steam, to throw over the rules and routine and go a bit batshit, safe in the knowledge that everyone is doing so, that this is a temporary suspension of order, permissible anarchy.  Author Iain Gately then travels the world demonstrating this principle in every continent and culture on the planet.

The only problem with the book is that for such a joyous subject, he writes it in a very dry, semi-academic fashion.  Perhaps that’s partly why it’s now out of print.  Since reading it I’ve wanted to do a similar book, going to the most extreme drinking festivals on the planet, following the same principle but getting stuck in as I do so rather than observing from outside.  The publishers won’t buy it though: it feels too much like a direct sequel to Three Sheets, and that’s the poorest selling of my three books (it sold well – just not as well as the other two) and it feels like it would serve the law of diminishing returns.

I haven’t let that stop me enjoying myself along the paths Gately has illuminated though: I go to as many of these festivals as I can.  The Jack in the Green Festival in Hastings on May Bank Holiday is a marvellous release of pagan lust and joy until about 4pm, when everyone goes back home and puts the kettle on.  And I’ll soon be writing about various Wassails I went to in January – hundreds of people standing in a muddy farmyard at night in the middle of January, worshipping trees and getting riotously pissed, smack in the middle of the grimmest time of the year – it makes me tear up just thinking about what a wonderful expression of the human spirit this is.

Which brings us to St Patrick’s Day, celebrated around the world today.

Here’s are ten things that I really, really don’t want to talk about today, because it utterly misses the point (even though I might have done in the past – today is not the day):

What I shall be doing instead is marvelling at the way people across our entire planet use a flimsy excuse to give themselves permission to celebrate, not celebrating anything in particular, not really, but rather adopting an oversimplified version of one of the world’s greatest drinking cultures and pretending to be part of it for one night, knowing that everyone else in pubs and bars the world over is doing the same.  And I’ll be marvelling that beer is at the heart of this, that beer’s sociability, its miraculous ability to bring joy to its groups of drinkers, is at the core of the ritual.
What will I be drinking myself?  Well, I’ll probably go to the Auld Shillelagh on Stoke Newington Church Street and fight my way to the bar in what is normally a quiet Irish pub, and have a couple of the best pints of Guinness in North London.  I might come home early and open the bottle of Otley porter I was sent for St David’s Day, or the stunning Imperial Stout that debuted the Meantime College Beer Club, or the Quantock Brewery Stout that won bronze in SIBA’s national bottled beer competition and turned up on my doorstep yesterday.  It doesn’t matter.  I’ll be drinking dark beer because that’s what you do on St Patrick’s Day.  It’s what everyone does. 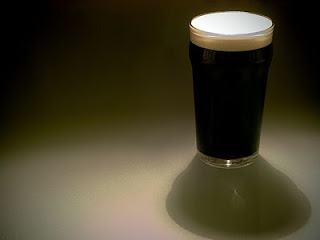 And that is, in my view, what’s really worth celebrating.

As it's also national muay thai day I'll be going training tonight and hitting some pads and/or people.

Nice piece, and I'd love to see your book on the subject, though I'd be willing to bet that there's more Blue WKD and Smirnoff Ice being consumed in Dublin right now than dark beer.

How about "Why do so many people (see that Angry Birds illustration as an example) confuse a shamrock with a four-leafed clover?"

i shall be celebrating by failing to pick the winners at cheltenham again, my st patrick's day tradition for the last 17 years…

I had a 2007 vintage Dark Star Imperial stout last night…could claim it was for St Patrick's day but really it was to commemorate 40 years of CAMRA and I wanted a beer so had to raid my "keep for the future" supply.

I'm actually halfway through three sheets to the wind at themoment Pete. The first half of the book covered places I've already been (excepting Madrid) and the next chapter covered somehwere on my list of places to visit (Portland) though not just for beer reasons. Have hops and glory to get into next.

Had the worst pint of Guinness I've ever tasted tonight which is unfortunate. I'm in Mongolia right now but figured I'd go for a pint of the black stuff at the local Irish bar (is there a capital city in the world without one?!) for St Paddy's. Paid 3 times the price of a local beer, feel like a right sucker. Instead went to another place and drank some decent local dark beer so it's all good.

Surprised to hear 3 Sheets wasn't so popular, I loved reading that book!

I drink Guinness on Paddy's day to get a free stupid hat.

surely they are mixing smirnoff ice and WKD blue to make green fat frog . but for me a turf fire and some home brewed courage russian imperial stout